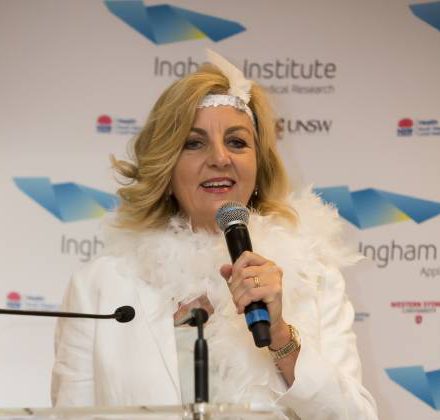 A world-first trial of a new prostate-cancer regime was announced last Wednesday. It is taking place at Liverpool Hospital and could represent a breakthrough in the treatment of this cancer. Ingham Institute’s Associate Professor Kieran Scott spoke about the trial at the institute’s Women’s Day Lunch on Friday at Camden Lakeside Golf and Country Club when […]

Ingham Institute’s Associate Professor Kieran Scott spoke about the trial at the institute’s Women’s Day Lunch on Friday at Camden Lakeside Golf and Country Club when he said the first man in the world had begun the trial.

Tickets for the Great Gatsby-themed event had sold out early and with raffles in play, it was announced a total of $96,000 was raised for medical research.

The event celebrated women working in medical research and science, with the Ingham Institute proudly supporting the cause.

The lunch was hosted by Sunrise’s Natalie Barr and the audience was addressed by Ingham Institute’s Associate Professor Kieran Scott who spoke about this latest development.

His journey began when he discovered a compound known as c2, which he’s spent the last 15 years researching to develop a treatment for prostate cancer.

Last Wednesday he announced that the first man in the world had started tests by taking the c2 compound at the Phase 1 Trials Unit at Liverpool Hospital.

“We found in laboratory trials that c2 not only shrinks tumours but can cause them to disappear completely,” he said.

“The trial will seek to involve advanced prostate-cancer patients, where standard therapy has failed. We’re hopeful that c2 may benefit patients with prostate cancer and this clinical trial is an important step along this path. As far as I’m aware things are going well – we’re hoping to complete this trial in six months.

“It’s a long process. It’d never been given to anyone before. We start at low doses to show it’s safe, then the next step would be to escalate it to a higher dose.”

He said they had a range of people apply to take part in the trial and that these developments were extremely exciting for him as he had family members affected by prostate cancer.

“Both my father and uncle passed away from prostate cancer. But now we’re way closer than ever  to realising the benefits of research in this country.”

Natalie Barr said this type of work was essential.

“We’ve been sitting around talking about Barnaby Joyce but this is what we should really be talking about! This is important and life-changing work,” she said.

“We’re at the cutting edge of research and today is a great way to acknowledge women’s achievements. We’ve come a long way since my mum’s time, when they were only offered domestic science, that was it – that was their education. So the fact women are making equal contributions to the world of science is amazing,” she said.

“I’ve written a book about menopause and it goes to show today things have really changed. When I first got it I didn’t know what to think about hot flushes because no one talked about it.

“I remember calling my mum who spoke about everything except menopause. She said it was the worst five years of her life – and this is coming from a woman who lived through the Depression and World War II! Women talk openly about periods all the time now!