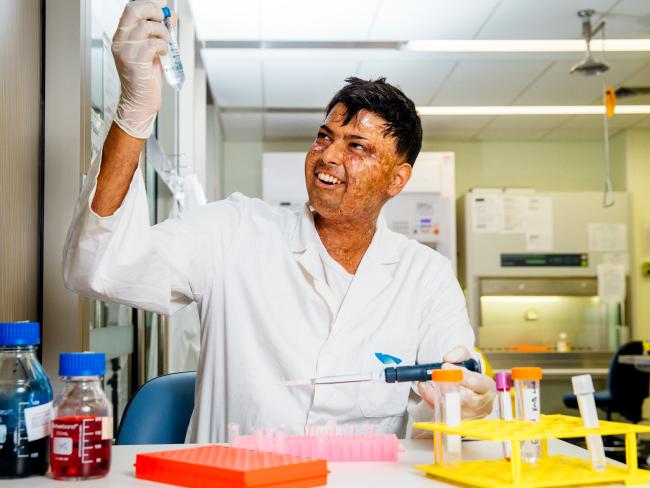 Parents and siblings may play an even greater role in determining our career choices than we previously thought, new research shows. However for our PhD student, Nikhil Autar, it was a leukaemia diagnosis at 17 that set him on the path to medical research.

MANY of us are asked from a young age what we want to be “when we grow up” and our answers are influenced by different factors. The people we know, our experiences, how much we value money, the ways jobs are portrayed on television, and the expectations of parents and teachers all shape our perception of what makes a good career.Data collected by Facebook Research reveals a strong correlation between career choices and what parents and siblings do for a living.

A son with a father in the military, for example, is about five times more likely to enter the military than one without.

Meanwhile, 15 per cent of same-sex siblings share an occupation — much higher than the 8.6 per cent rate for any two same-sex, same-age individuals.

Research from MasterCard Girls in Tech re-enforces the importance of family influence in the context of science, technology, engineering and maths (STEM).

Almost two-thirds (63 per cent) of girls in the Asia-Pacific region aged 12 to 19 studying STEM subjects at school have parents or elder siblings in STEM-related fields. The girls overwhelmingly rated parents as the biggest influence on career choice (68 per cent), followed by peers (9 per cent) and teachers (8 per cent).

The influence of teachers is stronger, however, for young people who choose a career in education. Queensland College of Teachers report Why Choose Teaching? reveals 46 per cent of survey respondents aged 29 or younger rated their own teachers as having “a lot” of influence on their career choice. This is stronger than the influence of family (34 per cent), friends (7 per cent) and partners (5 per cent).

SkillsOne chief executive Brian Wexham says schools hold sway over the career choices of students although they often push them towards university rather than vocational education, despite this not always being the best decision. Television plays a part, too, and he says programs such as MasterChef can be misleading. Wexham says the best way for people to make a rational career choice is for them to consider their passions then connect them with a job.

Nikhil Autar was diagnosed with leukaemia at age 17 in his final year of high school but rather than let it distract him from his studies, it inspired him to pursue medicine. Now 23, he is studying a Bachelor of Medicine/Bachelor of Surgery but has taken a year off to study a Bachelor of Medical Research.

“I’d love to be a medical researcher and a doctor, perhaps even a professor teaching at a university, some day — especially if I can work in something as important as cancer,” he says.

“They’re all professions where I can help people and drive ideas, where I can make an impact.

“From a personal perspective, it made sense (as) I’d often find myself suggesting treatments that I’d end up getting, but my interest went much further than that. I’ve always been an inquisitive person and I really wanted to figure out how things worked at their very base level.”

Autar says it is difficult for a school leaver to know what career suits them as they haven’t yet had much life experience. Young people should give themselves as many options as possible.

“We’re lucky enough to get a second chance too. Over two-thirds of my cohort in medicine are university leavers (and) my own brother moved from dentistry in Queensland to a commerce/computer engineering double degree … and he couldn’t be doing better,” he says.

“You can always change your mind. Chances are, you will at some point anyway so don’t be afraid of being wrong!”

Siblings are more likely to head down the same career path. Picture: SuppliedSource:Supplied

Top 5 ways to look before you leap

1. Online courses
Once you have a job in mind, explore related topics with a free online course and see how you enjoy it. Considering IT? Try coding on Codecademy. Might need a language? Download the Duolingo app. Can’t remember much high school chemistry? Brush up via FutureLearn.

2. TED Talks
School leavers and career changers can work out what inspires them by listening to other people talk about their industries. Watching or listening to TED Talks and presentations can spark an interest you did not know you had.

3. Work experience
Judge a job by trying it for yourself. While work experience participants typically only deal with low-level tasks, a placement can be a chance to see what others do each day. What technology do they use? Are they at their desk or in the field? Do they work alone or in a team?

4. Talk to others
Rather than judge a career based on how it is depicted in movies, talk to someone who does it in real life. Ask family members, teachers, coaches and friends’ parents about their role and what they most and least enjoy. In what direction is the industry heading? What skills are in demand?

5. Personality test
Ask a friend for their honest opinion or try an online quiz to work out the jobs that might suit your personality. Social people tend to do well in sales while disciplined people might be a fit for defence. A Roy Morgan Research and Career Wizard online questionnaire answers the question “What do people like me do for a living?”. It focuses on attitudes and life goals and compares a participant’s responses to those of people working in 96 different occupations. Take the test at careerwizard.com.au.

Originally published in the CAREERS SECTION OF SATURDAY’S THE HERALD Sun, THE ADVERTISER, THE COURIER-MAIL AND THE DAILY TELEGRAPH, by